1st Episode Impressions is an article series which focuses around critiquing the debut of a new anime or season’s very first episode to see whether-or-not it makes a lasting impression on me from the very beginning.  It also acts as an comparative point for my final review of that anime or season.
RWBY was a decent first try by Monty Oum (Maker of Dead Fantasy: Dead or Alive vs Final Fantasy and Haloid: Master Chief vs Samus Aran) in making his own anime, and while it was lacking in a lot of respects, it still proved enjoyable overall.  With Monty taking more time to work on the production of RWBY Volume 2, this will be my time to see if he has done his homework and managed to improve on his formula.
Also, be sure to check out my review for RWBY Volume 1.
1st Episode Impressions
Monty did a very good job starting off this episode by introducing two new characters to set a new mood (Especially because it is a new season).  Getting plot advancement going very early helps steer a direction for the entire series as well as for an episode.  Also, while we are getting at it about characters, I am glad to see that the background characters (non-important ones) are no longer completely “Blacked Out”, rather he has applied detailed character models to them.  This could be seen that he was under a lot of stress during the first volume and simply did not have the time to flesh them out and used the blacked out cast as stand-ins.  No idea on if we will see the same background characters used over and over again, but hopefully he has created a decent amount to where it feels fresh all the time (Or created a random character generator of some kind).  Though, I did see some behavior from Jaune that was uncharacteristic (When did he ever possess the athletic ability to do a front-flip while simultaneously grabbing and throwing a watermelon?).
From this episode you can tell he has improved the quality of his animation (Voice syncing included), it was very unpolished in the first volume but he is making constant adjustments it would seem.  Just the walking animation (As you can tell with the two characters in the very beginning) is still a bit awkward, but it is a far cry from the mess it was at first.  The panning and zooming also have way less senseless motion blur than the previous iteration of the series (Though it did stutter at the very beginning of this episode), he also seemed to have improved camera angles to better suit his characters (While I have always believed the way he edits his fighting scenes is his strong suit, it did not fit this type of 3D animation in volume 1).  Though, you still do have some issues with collision (Possibly).  As you can tell from the picture above, Yang’s arm is actually going THROUGH her hair, and at one point and time Yang spiked Lie into the ground and he seemed to be absorbed by it.  There are only small and minute things that are apparent but are vastly insignificant in contrast to what has been improved.
As far as action goes, there is already a scene in here that completely annihilates any and EVERYTHING found in RWBY Volume 1.  The food fighting scene is one of the most epic things I have seen in a VERY long time in any anime.  You had everyone using conventional food items in unconventional ways, Monty has always been great at his fight choreography which is the reason he earned so much acclaim for his amateur 3D productions in the past.  There are some questionable things in the realm of logic however (Even by anime standards).  A few examples are things like, “Where did a swordfish come from?!”, “Why is french bread strong enough to destroy a watermelon?!”, and “How are leeks sturdy enough to penetrate into the ground?!”.  Sure, these things make for excellent visuals during this food fight, but it also absurdly illogical (But does not make it any less awesome!).  This alone made the entire episode and provided a solid backbone for everything else, I am eagerly awaiting to see what else is in store.
The biggest thing to me however, was the dialogue.  Everything seemed a lot more fleshed out and enjoyable this time around.  Things were not worded poorly and came off a lot more natural, probably because it was tailored towards the individual personalities of all characters involved.  There were also a few references to things.  Ruby gave a speech about planning activities for the day that had remnants of speeches by Abraham Lincoln, Martin Luther King Jr., and Richard Nickson.  There was also a reference by Mercury and Emerald to something remembered in the series “Red vs Blue“, to which Monty Oum was the fight choreographer for at one point.  Not to mention small little other things that were funny in the visual aspects (Such as Ruby’s milk reading “Udder Satisfaction” which is suppose to be “Utter Satisfaction” and “X-Vay” instead of “X-Men” on the comic that Mercury was reading).

I say that they did a pretty damn good job this time around and that the series itself holds way more promise than before.  As long as they get the episode length under control (This one was 14 minutes long, significantly better than other episodes in volume 1) and continue to have production value of this quality, I think Monty will find an even higher level of success with RWBY Volume 2. 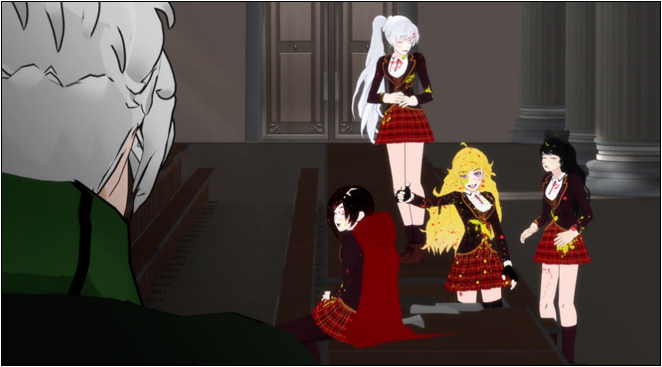 GOOD OPENING ACT!
Strengths   – Better animation, Funny dialogue, Incredible food fight choreography, Nice establishment of plot and villains.
Weaknesses   – Some animation issues, Opening is not as good as volume 1’s, Highly illogical food properties.
Despite a very minuscule amount of problems with the animation, this was a vastly superior episode in comparison to everything else done in Volume 1.  I distinctly remember being only eight minutes in and having to stop and tell my friends how badass this episode was in comparison to what I witnessed last volume.  Monty Oum has improved so much from working on the last season and I feel he is honestly putting every effort to improve all aspects that needed more polish.
As far as the story line goes, I feel they have built up a good enough foundation to be taken advantage of in RWBY Volume 1, and they are looking to make the most of it coming this volume.  I did think at first that it should have been more dark and gritty, but I feel RWBY has found its niche and is comfortably resting there with its own unique personality.  I cannot wait to see more of Monty’s crowning jewel.  Excellent work with the opening to this volume and I have high expectations of RWBY Volume 2.  Thanks for reading!
SHARE:
RATE: