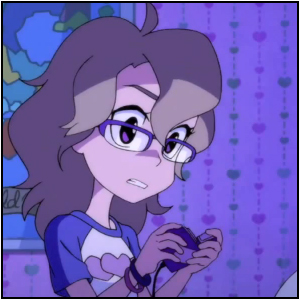 Everyone knows that I prefer Japanese anime and manga over American cartoons and comics for a variety of reasons (Story, plot, and character development just to name a few), however the preference does not prevent me from enjoying the small few that catch my eye.  And a trailer of a new DC Nation Comics Continuum Short, “Amethyst: Princess of Gemworld” did.

Starts off with a female gamer frustrated by her failure to complete a level, only to soon hear a woman call out her name saying she is needed.  Before long the female gamer is dragged into a magical doorway where she touches a crown and transforms into Amethyst, the Princess of Gem World (In magical anime girl fashion) where she is soon accompanied by a Pegasus and welcomed by her subjects.

For some reason or another I have liked the DC Shorts more than every series running in “DC Nation” except Young Justice, mainly because they are straight to the point without a ridiculous plot most of the time on top of unique artistic styles not typical of a serious DC animation.  This odd tidbit in regards to my preference explains why I was excited at the announcement came of brand new line-ups for DC Shorts, and I was more than surprised when I happened to see the trailer for Amethyst: Princess of Gemworld.

So, let’s talk about the “Amethyst: Princess of Gemworld – Level 1: Your Quest” trailer.  Starting off, I see something which appears to be a video game in regards to someone named Prince Topaz and another individual named Dark Opal (Which is in the full trailer that I did not place above, mainly because it is not in High Definition so please watch it if you would like to see the full commercial).  After being frustrated and wondering why she continues to have a “Level 6 Crash” and wondering why she cannot fix it.  Eventually from her game controller she hears someone yelling her name “Amy!  Amy Winston!“, by which she is then told she is needed in Gemworld.  Eventually a magic portal opens and she is dragged into it.  Upon touching a crown she goes through a magical girl sequence similar to Sailormoon‘s Sailor Scouts and transforms into Princess Amethyst.  As she is free falling from the sky of Gemworld she is lifted up by Pegasus who brings her safely to the ground into a crowd of people, including the same old woman who called her name and summoned her there.  The old woman began to talk upon their landing, “You have been summoned to find the missing gem.  Princess Amethyst has returned!“.  You hear various chanting from her subjects before it cuts to something lurking within the water in the well (Only its eyes are visible) and it says “To be continued”.

Wait?  What Exactly is Amethyst: Princess of Gemworld? 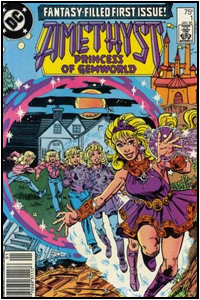 Amethyst: Princess of Gemworld first appeared in 1983 by starting off with a 12-issue limited series.  She later on received a 16-issue ongoing series in 1984 before it was finally ended in 1986 by a one shot in Amethyst Special.  She made various appearances in other comics, even one where she appeared with Superman.  Last year (2012) she is the main character in “Sword and Sorcery” from the reboot of the DC Universe.

Amethyst is the most powerful user in Gemworld and has many powers which she uses in order to combat the enemies she comes up against (Such as flight, matter transmutation, and spell-casting).  Also, if you watch Young Justice and/or are familiar with “Doctor Fate” and how he is a “Lord of Order”, it should not surprise you that since Amethyst is a very powerful magic user who sides with justice that she is a Lord of Order as well.  The main antagonist of the first series is Dark Opal who she fights in order to free Gemworld of his oppression.

Reasons I am Excited for this Short 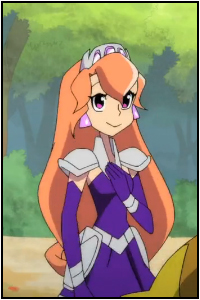 First off, it is being made by the same people who are responsible for Teen Titans, which first got me into DC Cartoons because it reminded me so much of westernized characters being done in an anime-esque fashion.  Besides that, the trailer was simply astounding and appealed to both my otaku and gamer sides simultaneously.

Beyond just the presentation and the history of those making it is the story in itself.  It seems like it will be well done (You can see a couple more scenes for this short in a video found on this page).  Seems like this short may be just acting out her defeating Dark Opal and bringing peace to Gemworld.  Also (As you can see from the right), 13-Year-Old Amy Winston does indeed transform into Princess Amethyst but is not transfigured into a fully grown woman upon doing so and retains her age (I believe so at least).  All-in-all, as far as presentation and story goes, I am sure this will quickly become a favorite amongst watchers.

Even seeing as they rebooted Princess of Gemworld, I am very surprised to see it in the spotlight as a DC Nation short.  I am very happy they are at least using Brianne Douhard of Teen Titans and David Production who does animation for Black Butler and Code Geass: Lelouch of the Rebellion for a real anime-style feel.  I am just waiting to see how it plays out and if it can actually garner enough support to possibly support a series after this short is over, possibly focusing on the issues that happened after the main story with Dark Opal.

Thank you for reading!  Arigatou and Sayonara!