Looking on RoosterTeeth’s YouTube Channel, I was checking to see if the “W” Trailer for Monty Oum’s  new animation “RWBY” had released (To no avail) but I did find a movie trailer for something called “noobz”.

At first I was hype because it seemed like it was going to be a funny, interesting movie for all of us gamers out there but upon watching the trailer in full I was completely disgusted by what I saw.  This movie seems to completely stereotype gamers as being no-life, anti-social idiots who are all awkward and over-the-top.

I want to tell you why I believe this movie will only help to cement negative stereotypes for the gaming community and only give more “ammo” for non-gamers. 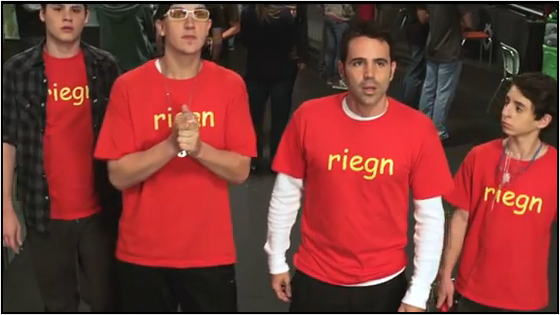 A “noob” is someone who think they are good at the game and has spent considerable amount of time in a game but are actually very bad at it and worlds worse than they think they actually are.  I would have loved for this movie to be about 4 guys who think they are tough stuff to travel to a tournament and lose horribly even though they do so well online and find out that there are bigger fish than they are and to have their hopes crushed.  I would then have liked for them to receive training from someone, probably someone famous in the MLG circuits, in order to become a good team in order to attempt to win an even more prestigious gaming competition and defeat the team that originally took them out.  For good drama someone could find a girlfriend along the way that distracts him from practice, maybe their best player has an offer to join another team and takes them up on it, maybe someone attempts to betray them by telling their strategies to another team by using a rewired Turtle Beach headset or something. Overall though, I would have liked a movie that portrayed noobs turning into actual pro gamers.  Even more it will show how you can mature while playing games and turn into respectable players of high skill and how much work it actually takes to be a competitive gamer.
Also, since League of Legends is probably the most played game in the world (I do not play it), I would have liked for that to be the main game so that we would get tons more people to see gaming in a positive light by bringing along friends and family (Not to mention we would possibly get more game-related movies if it blew up at the box office and maybe a sequel featuring StarCraft II: Wings of Liberty or something).
What the HELL was EPIC thinking?!
With the Gears of War logo plastered everywhere, including posters at Cyber Bowl III and at the gaming shop showed in the trailer, they have to be officially sponsoring this movie or at least gave an “OK” for them to do it; why did they give this a green light?!  Epic is are the creators of the famed Unreal Tournament Engine, Unreal Tournament gaming series, Gears of War series, and many other things; so they should be completely in-tune with the gamer.  However, I cannot help but think that they are getting money hungry and are banking on gamers going out to see this movie because it has Gears of War in it and that us gamers just want another movie about us.  Really though, if you were going to help endorse this movie and put any type of resources behind it, why not go ahead and make that Gears of War movie everyone is waiting on?  Even a CGI movie similar to Final Fantasy: Advent Children would have sufficed for me.  I think this is a poor choice and something I do not think would have happened if Cliff  Bleszinski “Cliffy B” was still a member of EPIC, no way on God’s green earth would he have green lit this foolishness.
The Verdict
Regardless of how I feel, I will still go to support this game simply because it is video game related, however, I already know that it will more than likely be nonsensical and absolute trash.  I remember being a “noob” and a “scrub” and maturing into a gamer who does not talk trash unless provoked, responding to hate-mail in a grown-up fashion, and not tea-bagging unless the guy is asking for it.
On the other hand, this movie may just surprise me and go, “Hey, Derek!  You cannot judge a book by its cover!” which I would then have to go into my kitchen and eat a nice big slice of humble pie.  Until then I will shun this movie for the simple fact I think it completely misrepresents competitive gamers and the seriousness and ferocity of the competition and the competitors.  I am still mad at EPIC for having involvement with it and for everyone involved for that matter simply because the impressions given are negative and laughable at best.  Oh well, we will see what happens when the movie finally lands.
Thank you for reading.  Arigatou! Sayonara!
SHARE:
RATE:

13 Replies to ““noobz” Movie Trailer All but Promises Disappointment”