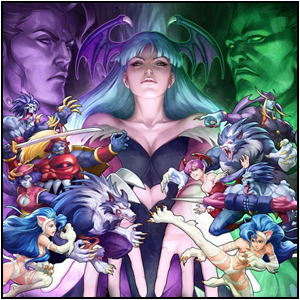 CAPCOM has kept up a steady stream of High Definition re-releases of their fighting games with Super Street Fighter II Turbo: HD Remix, Jojo’s Bizarre Adventure, Marvel vs Capcom 2: New Age of Heroes, and even Marvel vs Capcom: Origins.  So it is no wonder that one of their most beloved classics would see a return in DarkStalkers Resurrection that comes with DarkStalkers 2 and 3.
What I want to do in this article is tell you why I am personally hype for this release and cannot wait to get my hands on it again.  In addition to this, what the significance of an HD might be in telling us what future could hold for the DarkStalkers franchise…and how DarkStalkers Resurrections‘ performance could directly effect that.


Seems at New York Comic Con during its panel, CAPCOM announced “DarkStalkers Resurrection” which will be DarkStalkers 2 & 3 (Known in Japan as Vampire Hunter: DarkStalkers’ Revenge & Vampire Savior) put together in a Downloadable Game (Which is similar to their recent 2-game pack release for Marvel vs Capcom: Origins which featured both Marvel vs Capcom and Marvel Super Heroes).  It will feature 18 player characters.

The game itself is going to cost $15 dollars, which is the equivalent to 1200 Microsoft Points if you are on an Microsoft Xbox 360 console.  Seems the game will be powered by GGPO, a well known netcode that got its first major use in Super Street Fighter II Turbo:  HD Remix.  Beyond this, it will have loads of additional modes (Some shown in the trailer), such as: Replay Sharing directly to YouTube, Online play with lobbies up to 8 people with spectator mode, Challenge/Tutorial Mode, Unlockable extras which features concept art, and other things.

This game will be available for the Xbox Live Arcade and Playstation Network in “early” 2013.

Why I AM Personally Hyped For DarkStalkers Resurrection

This announcement came as a surprise, especially since I figured I would not see an online release of DarkStalkers 3 (Vampire Savior) with online capabilities for the simple reason they released DarkStalkers 3 in all of its Playstation 1 glory on Playstation Network earlier this year. The fact I will get to experience this great title with a fighting game community around simply sends chill down my own spine, especially since I did not get to do so the first time around.

As you can tell from that picture, I own a copy of DarkStalkers 3 for the Sony Playstation; I remember trading my friend DarkStalkers 3 for my TEKKEN 3 back in 7th grade Middle School and we never did get a chance to trade back.  I played the game vigorously because I had never gotten a chance to enjoy a DarkStalkers game because they were notoriously hard to find around my area for some reason.  Moreover, I am glad that this has online functionality because I had no one around to play fighting games with and partake of the experience with me.  This will allow me to power-up my skills with my favorite characters, Queen Bee and Hsien-Ko(Lei-Lei), the latter whom I wrote a bit about when she debuted for Marvel vs Capcom 3: Fate of Two Worlds, which you can read about HERE).  However, the most significant reason I am hype is because back then when I was playing on Playstation I did not now how to actually play fighting games, I mostly button mashed with the exception of supers.  This time around I will be able to learn what to properly do and hopefully have some decent competition so that I might be able to experience DarkStalkers in its true glory.

Personally I do think they added DarkStalkers 2 & 3 just so people can see how they differed and what both of them had to offer.  However, I am seeing the Fighting Game Community leaning more in favor of Vampire Savior in competition should they decide to have any tournaments upon the release of DarkStalkers Resurrection.

Something else is because we will probably get to see Daigo “The Beast” Umehara (CAPCOM’s “Player of the Decade”, whom Japanese media often call “God of 2D Fighting Games”, and Evolution Champion for Street Fighter IV in 2009 & Super Street Fighter IV in 2010), who is one of the most recognizable names in fighting game history, get to play in the game that he got his start.  Many people believe he was probably the best person to ever play DarkStalkers, winning many of his local tournaments and actually had a 286-Game Win Streak in an arcade in Akihabara before he had to leave because it was closing time.  If this game comes back to competition and Daigo returns with the same skill, we will get to see him in his TRUE prime.

The Significance of the High Definition Re-Release

Plain and simple, the re-release seems to be a precursor to us seeing a DarkStalkers 4.  I believe that if enough support is garnered by means of sales through the Xbox Live Arcade and the Playstation Network releases of DarkStalkers Resurrection we will get a proper next generation sequel for Vampire Savior.  I know you may think that I am being a bit hasty, but let me give you some facts in order to back up my claim that this is what that is.

We saw a release of Marvel vs Capcom 2: New Age of Heroes, and shortly after that we saw Marvel vs Capcom 3: Fate of Two Worlds.  Not only this, but we have a major pushing from Yoshinori Ono, the main person for helping get Street Fighter IV and Street Fighter x TEKKEN into the hands of the players. I believe with the shakiness of the fighting game industry because of the over saturation of games, and the poor sales of Street Fighter x TEKKEN, they want to make sure they have a market that is ready to openly receive a new DarkStalkers game should they make one…so I say the stage is pretty much set for the next generation of Vampire Savior as long as we get a good performance from DarkStalkers Resurrection.

DarkStalkers is one of the most memorable fighting game franchises in all of history with a cast that is completely unique and all its own.  The fact that it is seeing a re-release in DarkStalkers Resurrection makers the return of a great series that we have not been able to play and enjoy for all too long.  Despite the robust amount of fighting games we have at our disposal as of now, HD releases of previous fighters, and announced fighters not too far in our distant future, this will hopefully gain enough support to show CAPCOM consumers are willing to spend their hard-earned money on a true sequel.