Galko-chan is an anime character whom I have come to through various sightings across the internet.  I had no idea the origin of this character, but that many professed that people were going to get hooked on her once the manga had an anime adaption.  Lo-and-behold, I find out that Please Tell Me! Galko-chan has an anime already out! 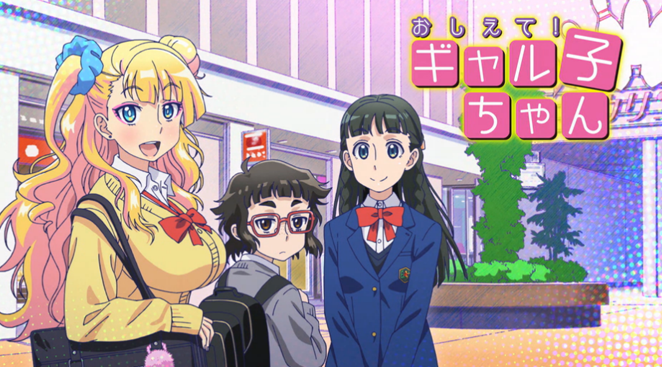 To be honest, with the way things were portrayed on the internet before I even started this series, I expected it to be about a girl whom was very ditsy and probably more than a little flirtatious.  Maybe the girl would be oblivious to her sex appeal because of her large chest, and would be ignorant of how she came off to others [as unintentionally sexy].  It could also be the opposite where she was intentionally flaunting her assets and gained amusement from making those who were a bit reserved timid.  However, this was very far off from what I have actually seen as the cast of girls are not particularly ecchi, rather they are just curious teenagers who discuss with each other things that any young adult would.

“A bit sharp-tongued, but a good-natured popular girl in the class.  Her hobbies are watching movies and cooking” – Anime’s Description of Galko.

I think Galko is really very cute and is tied for my favorite out of the leading ladies.  Galko is quite busty which gives her a sharp boost to her appeal overall.  I feel like her hair flows perfectly and they did a good job of making her blonde with blue eyes, it suits her well.  I also like, how compared to most girls, she is very “dolled-up”, primarily because of her make-up and fingernail polish which is absent from her friends.

“Likes to be in the corner of the class, but she’s somehow friends with Galko.  Her hobby is messing with Galko” – Anime’s Description of Otako.

Tied for my favorite with Galko, I really like how she was designed.  She has thick eyebrows, thick glasses, very short, and is obviously the smartest of the three.  She has quite the troll-like attitude when it comes to disproving what Galko believes to be true (or when she tries to be cool), and takes amusement in embarrassing her friend.  Her attitude is my favorite out of the three even though Galko is by far the cutest, but I guess it was designed that way.  She stands out perfectly in her own right.

“An airhead that hangs out with Galko and Otako.  She has multiple hobbies” –Anime’s Description of Ojou.

To be honest, this girl is the odd-man out.  I do not really feel any type of way about her, either for or against.  She seems to be there to essentially bring the “bland” factor to the three friends in order to avoid a complete polarization between the two extremes that are Galko and Otako.

This anime seems to be about asking random, perverted questions and seeing the characters react to these things by answering them for better or worse.  A good example of this resets within the very first seconds of the first episode.  A question is posed saying, “Is it true that people with big boobs have big areolas, as well?”, to which Galko responded in kind by saying that they are “They’re a normal size”.  Otako sheds light on this question having Galko draw a circle within a circle on a balloon and then blowing it up, watching the circles expand based on how large the expansion was; proving that bigger breasts have nipples and breasts proportional to the curvature of the breast itself (which increases with size) .  These types of things are expressed throughout the entirety of the seven minute long episode, posing other such questions as “Do girls breasts grow if a boy massages them?” and “Is it true that even young girls have hair on their butts?”.  People in the Crunchyroll comments were even saying things like “Mythbusters, anime edition”.

However, while Please Tell Me! Galko-chan does veer on the ecchi side of things, do not mistake it for an anime that is as perverse as Ikki-tousen, Queensblade, or Senran Kagura.  The ecchi factor present seems more inline with questions due to adolescent curiosity than the manga-ka attempting to sexualize characters by having them bring up sexual themes.  To be honest, I find that these questions are actually just harmless fun.  Learning whether-or-not pubic hair can be told by the thickness of someone’s eyebrows is quite hysterical.  These are often things I can see anyone wanting to know, even if they feel it is “too much information” to have knowledge of these matters.

I feel like anyone who wants to gain more knowledge about obtuse sexual questions while laughing at the reactions of the characters entangled within them may like this anime.  It is only my first impression, but I can see myself finishing up this series, especially since each episode is only about 8 minutes in length.  Hopefully things continue the way they started out with this series, I look forward to it!