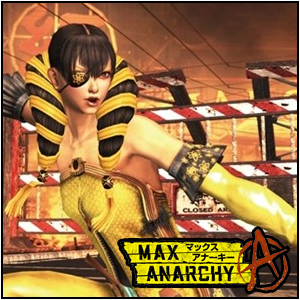 Anarchy Reigns (Max Anarchyマックス アナーキー  in Japan) is the next big thing coming from Platinum Games;  known for working on Vanquish, Bayonetta, and the upcoming Metal Gear Solid: Revengeance (Formerly known as Metal Gear Solid: Rising).
This is a beat-em-up brawler that is fashioned more akin to how Power Stone played back in the days of the Dreamcast, bringing back instant nostalgia and instant feelings of excitement.
Having just found out about this game, I want to talk about what I already know, what I hope from the game, as well as exactly what I am already liking/disliking about this title thus far.
-[ DISCOVERY ]-
My friend Rasean posted on his FaceBook wall with some trailer for a game, normally I do not look into the games that he posted but it was something about the title “Anarchy Reigns”… just has a feel of “Chaos” about it.  As I clicked on the video and it began to load up, the “Tag Battle Trailer” (Which you can see above) I was reading the description and found out that it reminded the uploader (Maximillion from “Assist Me!” an Ultimate Marvel vs Capcom 3 series) of Power Stone and that the creator was none other than Platinum Games, the people who made my favorite game of 2009, Bayonetta.  I clicked play and watched the trailer, and what I saw got me very, very HYPE.
First off, it starts with some pretty sick music and Japanese text that I cannot understand.  Next thing you know it starts displaying all the different modes that are currently available and the music gets even better as the guy begins to rap.

I must say, I am already hype by this point and seeing that Team Battle is 4v4, but the fact that the trailer also showed a variety of different things through it.  It seems that a big emphasis was placed towards online, which is good since I am mostly an online player; I liked the fact that there seemed to be a variety of modes for you to team up with your friends against other players or simply against the computers which is very good (I am starting to really enjoy games that value teamwork, having that in more of a fighting game environment is also right up my alley.
But in addition these modes it seemed to be quite a bit of other things going on after further examination; such as special abilities, the ability to setup a teammate, and even switching between hand-to-hand and weapon based combat.  I saw one character (Ai Rin) setup a protective shield around her team mate that seemed to absorb a single attack, I saw strategical maneuvering during the respawn period after someone has died and are awaiting to return to the battle, even one teammate holding an enemy while another player threw a valley of fists into his chest.  Even with all of these things it seems they have something for people who do not necessarily want to fight to fight others through way of a “Survival” mode, which seems to pit you against normal CPU controlled characters and “bosses”, even saw a group of players gang up on a car with a Gatling gun mounted onto its roof.
This trailer showed a lot of things happening and some of the possibilities that could take place in this game, but with that being said I was itching to learn more and find out exactly Platinum Games and Sega cooked up for me this time around.
-[ WHAT IS THIS GAME?! ]-

Anarchy Reigns(Max Anarchyマックス アナーキー ) is actually a beat-em-up, brawler-esque type of game that features some of the characters from the game “MadWorld“, including its main character Jack Cayman.   This game is heavily focused upon online play and co-op with teammates against other humans and the CPU (“Survival” mode).  Originally many thought this was a sort of sequel to MadWorld, but now Platinum Games suggest that it is not a sequel, which means that we could very well see a future to that title in the future depending on the success of Anarchy Reigns (Or so I am  thinking).

Anarchy Reigns in itself features a lot of characters from MadWorld but I believe it also has some original characters.  So far,  they have 10+ characters I have saw within a trailer that features all the characters as of May 4th.  The characters in themselves are very diverse and because of that, you have a lot to choose from.  When asked the top two characters within that fan-made trailer which displayed everyone so far, there were a lot of different opinion on who they liked, including all of my friends.  Personally myself, I like Mathilda (Pictured Above) who uses an “Iron Maiden”, a bat with many energy spikes coming from it; Big Bull, a mechanical cyborg robot with a human brain that wields a jet hammer, similar to King Dedede’s from Nintendo; and Ai Rin, the youngest of three sister assassins (The Rin sisters from MadWorld) who makes Bruce Lee type noises when she fights, is the most playful and hyperactive of the three (Other two sisters are Fei Rin and Rin Rin), and uses nun-chaku with energy blades (By the way the energy looks it reminds me more of a sickle, kind of like the one Axl Low from Guilty Gear uses, but with a shorter chain connecting the two).  There are many other characters you can choose from, a transforming robot, one of the antagonist of MadWorld who has duel Positron Blades coming from his arms, even Bayonetta, the heroine of the 2009 Action/Adventure title that shares its same name.  With so many characters it should not be hard to find someone you like and diverse enough to where teams of different people constantly pop up.

As far as the modes so far, there seems to be a Story Mode(Self Explanatory), Team Death Match(4v4), Team Battle(4v4), Tag Death Match(2v2), Tag Battle(2v2v2v2), and Survival(3 Players); but there is also talk of additional modes, such as 16-Player Battle Royale, 1-on-1 Cage Match Mode, and even a mode that is something of a sports game called “Death Ball“.  In all, there are rumored to be 11 different multiplayer modes, which is quite a large selection to choose from and should prove hours and hours of enjoyment that will take a very long time to get stale, if at all.

All of these things make up Anarchy Reigns, and it seems to be a thrill ride I am willing to go along with.  There are diverse characters, diverse modes, and it is a high-action packed game with a huge emphasis on playing with others; this should promote well if they get it right… and let me tell you what I want and expect from this game, but also the mistakes they could make to where this does not reach its full potential.

This game has massive potential but it also has the massive potential to not achieve all it could be and end up disappointing from lack of meeting the high expectations the trailers thus far have provided.  In the following paragraphs I want to talk about everything I am expecting and what it could fail at and be a let down from my own perspective.

First off, I am hopeful that this game will give me a experience akin to Power Stone back on the Sega Dreamcast, but to a much higher degree.  I am expecting for it to give multiplayer experiences that are fun to the point that I have friends coming on my list wanting to play this game and nothing else; I think this can be achieved by giving a sort of development of the characters through the use of leveling and upgrades and having a type of persistence to make you feel rewarded when you play; maybe they can give you additional moves so you could build your own skill set.  Something else would be randomizing the enemies and levels you do when you do “Survival” mode, and no idea why it is only 3 players available for that mode and not 4, but it may be because of a lot of things going on.

As far as screwing up, I got countless ways they could actually mess this game up.  First off, the emphasis on online modes may provide nothing of an offline experience; and sometimes you just do not want to have to depend on others for your enjoyment, sometimes you want it to come from you and the game itself.  The next off with this, is because they are putting so much into online they may butcher the story mode, or it could be short and uninteresting.  The characters could only have a few moves and no great variety, and handle exactly the same which could very well promote people to go with the fastest or hardest hitting character since there is no benefit for some characters and obvious benefits for others.  Also, the handling and controls of the game cold be very clunky and make it not fun to play at all.  Things in the environment could actually be predictable or combat could become mundane and uninspiring and feel like the same battle over and over, even across different game modes with different characters.  The online could also be very laggy and buggy, the matchmaking could be a pain in the neck, and the whole experience they are trying to provide could be the very element which drags the game down because of the huge focus on online gaming.

Anarchy Reigned could very well be one of my favorite games of the year, but it also has the immense potential to end up in disappointment, a sirens call lead by the hype of destruction and mayhem wrapped in pretty little trailers that ultimately end up in nothing.  But I am looking forward with bright eyes and eager hands ready to pounce it the day it releases.

Interesting characters that have design and personality, co-op to enjoy with friends and family, and a variety of modes that threaten to waste away your days into gaming goodness.  Yeah, it looks very pretty and hopefully it comes out exactly as I picture it.

I’m RoK the Reaper and thanks for reading!  Sayanara!