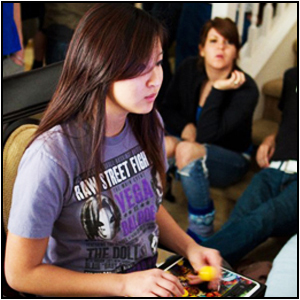 With the release of Street Fighter IV we began to see fighting games pull back to the forefront.  We saw the return of old faces and an influx of new ones, some of them you see constantly and never know who they really are.

You have probably seen her at tournaments, on live streams, or being teamed up with some already established names in the community; but really, who is Sherryjenix?  In this interview I want to do my best to cover this and also analyze what has given her the love for Street Fighter that causes her to compete and aim to be one of the top players in the community.

A car lover and fighting game fan, hit the jump to check out my full interview with Ms. Jenix.

Sherryjenix was a name I saw a couple of times during live streams and I had really no idea who she was.  You see a lot of “randoms” on streams, and thus, not much attention was initially given to her.  However, I kept seeing Sherry’s name pop-up and I began to question the attention I had payed, people seemed to know her alias but said little else in regards to WHO she was.

With the release of Super Street Fighter IV, I got to see many players in action like: Daigo Umehara, Justin Wong, Alex Valle, and many others that are considered veterans in the community.  However, I got to see the rise of other people who I had never heard of but that I had come to know after repeatedly seeing them on stream and competing at A-Ranked tournaments, such as: Online Tony, Wolfkrone, and Vangief.  After interviewing the mystery known as “desk” (Check it out Here), I decided the next person on my agenda was Sherryjenix.

Sending an inquiry for an interview to her through means of her contact information on her website, www.Sherryjenix.com.  She accepted said request and gave swift replies to which I can know happily deliver to you, the Street Fighter community.  Check below for the full, 19-question interview with Sherryjenix.

There is always something exciting about finding new things about players in our community, especially those that are on the rise.  Going from dead last in her first tournament to 33rd in the Canada Cup is a huge feat; not to mention her taking 2nd with PR Balrog and Wolfkrone in the 3 vs. 3 Super Street Fighter IV at the NEC 12 tournament.

Hanging out with top level players as well as having determination can be a scary thing, it can help provide the tools to shape you into a top tier beast and bring out potential that may not have come out otherwise.  I think it is safe to say that Sherryjenix is well on her way to becoming a top player if she continues down this path and continues to sharpen her fangs.  I am looking forward to her future endeavors and how she will fair in other fighting games.  Thank you for reading this interview on www.RoKtheReaper.com, please leave a comment below!

OTHER
In order to better keep up with myself, RoK the Reaper, and Sherryjenix, you can use any of the following mediums to keep track of our activities, Thank you!

Fortnite:BR | Reaper Owners Mad About John Wick
RoKtheReaper.com is BACK! New information and a preview of upcoming articles!