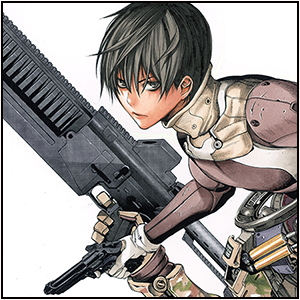 ALL YOU NEED IS KILL is a popular Japanese military science fiction novel written by Hiroshi Sakuraza with illustrations by Yoshitoshi ABe.  “ALL YOU NEED IS KILL” has also earned a manga adaption written by Ryousuke Takeuchi and illustrated by popular artist Takeshi Obata (Death Note, Bakuman, Ral-Grad, etc.), and is currently serialized in Weekly Shonen Jump.  An American film adaption titled “EDGE of TOMORROW” is also based off of the light novel.
In this article I am going to give you the latest press release for the manga adaption of ALL YOU NEED IS KILL, which anounces the dates and pricing for the simultaneous release of Volumes 1 & 2 for both Japan and VizManga.com, including a date for the delux omnibus print volume.
Press Release 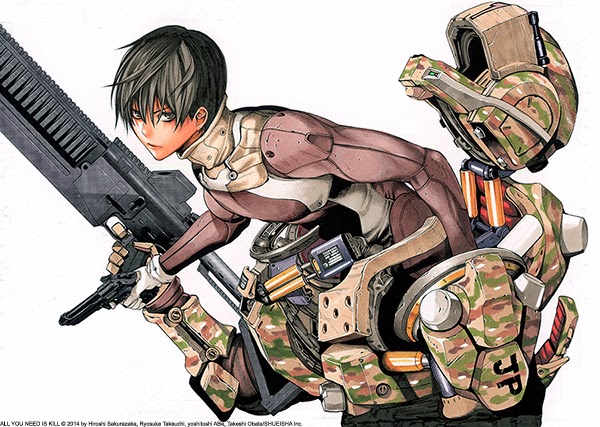 VIZ Media, LLC (VIZ Media), the largest publisher, distributor and licensor of manga and anime in North America, offers time-loop sci-fi military action from one of the biggest names in manga with the debut of Takeshi Obata’s ALL YOU NEED IS KILL on Thursday June 19th, the same day it is available in Japan. The new manga will release digitally across all platforms serviced by VIZManga.com and the VIZ MANGA App, and will also be available on the storefronts for the Kindle, iBooks, GooglePlay, Kobo and Nook.
ALL YOU NEED IS KILL Volumes 1 & 2 are rated ‘T+’ for Older Teens and will each carry a digital MSRP of $6.99. VIZ Media plans to release a deluxe omnibus print volume on November 4th under its Shonen Jump Advanced imprint (MSRP U.S. $14.99 / CAN $16.99).
Takeshi Obata’s ALL YOU NEED IS KILL ran in VIZ Media’s WEEKLY SHONEN JUMP digital manga magazine earlier this year and is the stunning manga realization of the popular Japanese sci-fi novel, written by Hiroshi Sakurazaka. In the rousing action story, when the alien Mimics invade, Keiji Kiriya is just one of many recruits shoved into a suit of battle armor called a Jacket and sent out to kill. Keiji dies on the battlefield, only to be reborn each morning to fight and die again and again. On his fifth iteration, he gets a message from a mysterious ally – the female soldier known as the Full Metal Bitch. Is she the key to Keiji’s escape or his final death?
The bestselling ALL YOU NEED IS KILL novel also inspired a new live-action summer blockbuster – EDGE of TOMORROW – starring Tom Cruise, Emily Blunt and Bill Paxton that is scheduled to premiere in U.S. theatres on June 6th.
The original novel also was the launch title in 2009 for Haikasoru, VIZ Media’s unique literary imprint dedicated to publishing the most compelling contemporary Japanese science fiction and fantasy for English-speaking audiences. New York Times best-selling author John Scalzi declared ALL YOU NEED IS KILL to be a book that, “reads fast, kicks ass, and keeps on coming,” and it has proven to be one of Haikasoru’s most popular titles. VIZ Media has also published a special movie tie-in version of the ALL YOU NEED IS KILL/EDGE of TOMORROW novel to support the release of the new live-action film.
“Takeshi Obata interprets this critically acclaimed novel in a new way with his manga treatment of ALL YOU NEED IS KILL, and we can’t wait for fans to discover the exciting new digital release in June, debuting just after the highly anticipated premiere of the EDGE of TOMORROW film,” says Andy Nakatani, Editor. “The riveting characters and climactic action tale are depicted with Obata’s signature flair. Don’t miss this special new release from one of the most renowned creators of the manga genre!”
Manga artist Takeshi Obata was born in 1969 in Niigata, Japan, and is the artist of the wildly popular SHONEN JUMP title HIKARU NO GO (available from VIZ Media), which won the 2003 Tezuka Osamu Cultural Prize: Shinsei “New Hope” award and the 2000 Shogakukan Manga award. Obata is also the artist of the smash hit series, DEATH NOTE (also published by VIZ Media), as well as Arabian Majin Bokentan Lamp Lamp, Ayatsuri Sakon, Cyborg Jichan G. ALL YOU NEED IS KILL is his latest work following the hugely successful series BAKUMAN｡ (also published by VIZ Media).
Readers are invited to catch the ALL YOU NEED IS KILL manga featured on VIZManga.com and the VIZ MANGA App for the iPad®, iPhone® and iPod® touch, Android-powered smart phones and 7” tablets, as well as on the Nook, Kindle, Kobo, iBooks and GooglePlay stores. With these dynamic platforms, fans can explore and enjoy a wide range of new and classic manga series that spans more than 2,100 volumes across more than 200 different series.
The free VIZ Manga App continues to be the top application for reading digital manga and features a massive library of the most popular series in the world. Through the innovative VIZ Manga digital platform registered users are able to use one account to view their purchased manga across more devices than ever. New series and volumes are added every Tuesday. Fans can also find these titles and more for the NOOK, Kindle Fire, and Kobo ereaders, as well as in the iBooks and GooglePlay Stores.
All manga volumes are available for purchase and download in the U.S. and Canada within the VIZ Manga application starting from $6.99 (U.S. / CAN) each and readers can also explore all titles with free Chapter 1 previews of every series. For more information, please visit VIZManga.com or www.VIZ.com/apps.
Download the free VIZ Manga App for Android and iOS devices at www.VIZ.com/apps.
To learn more about VIZ Manga, please visit www.vizmanga.com.
EDGE of TOMORROW Trailer
EDGE of Tomorrow is the U.S. Film Adaption of the popular Japanese military science fiction light novel “ALL YOU NEED IS KILL“, starring Tom Cruise, Emily Blunt, and Bill Paxton.
SHARE:
RATE: