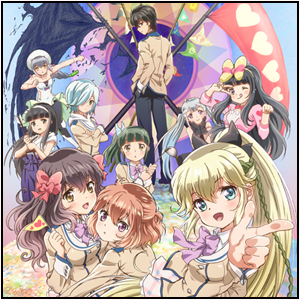 NIS America has now acquired Kanojo ga Flag wo Oraretara (“If Her Flag Breaks”) for North America.  This series is based off of a light novel of the same name, much like Kyoukai no Kanata or Outbreak Company.  The author appears to be Toka Takei and is illustrated by Cuteg. Viewing currently being available through Crunchyroll and it is also planned for them to offer retail releases sometime in the future.
Kanojo ga Flag Oraretara is about a transfer student, Sota Hatate, who is able to see the future of all those around him via a flag that symbolizes their fate above their heads.  Also, he ends up living together with many beautiful girls instead of alone as planned when he transfered to the elite Hatagaya Academy.
From the description alone, this sounds like it is going to be a harem anime with the protagonist having some weird form of “Shinigami Eyes” (Think Death Note).  No idea if this is going to be a completely serious anime (With him bieng able to see the fate of those around him) or if it is going to be a light-hearted anime that focuses on the harem aspect (From the drawings, I would suggest the later).  You can check this series out on Crunchyroll right now if you are interested in seeing what it has to offer.
SHARE:
RATE: