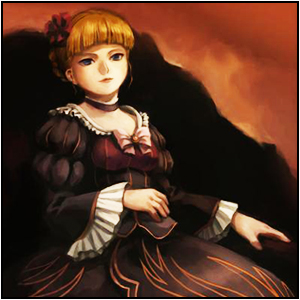 Umineko no Naku Koro Ni first came to my attention from the doujin-style fighting game based off of it called “Ougen Musou Kyoku X“, I had to know where the origins of such a game came from.
Taking an interest within the game, and wanting to know more about the origin of the one really elegant looking character (Beatrice, the Golden Witch seen here in the main picture), I delved into the anime head first!
Phoenix Wright style finger-pointing, plenty of murder mysteries, endless scenarios, trickery, witches, the blurring of lines between fantasy and reality with high-level arguments to boot; I give to you my anime review for うみねこのなく頃に Umineko no Naku Koro Ni!

-[ WARNING! ]-
My reviews are normally elaborate in describing my thoughts and feelings; so hints and/or reveals of the story, character development, and any plot twists regarding the subject that it covers may arise due to the amount of detail needed for explanation.  Being mindful of the fact that spoilers could come into play, it may be better for you to watch, read, and/or play the material before reading this review.  Thank you and happy reading!
-[ WHY UMINEKO no NAKU KORO NI? ]-
This anime came to my attention because of the game called “Ougen Musou Kyoku X“.  This game had some very outlandish game play and had quite the array of characters that seemed to be very noble and elegant in demeanor.  Later, I found out that this game features characters from Umineko no Naku Koro Ni (When the Seagulls Cry), which originally started out as Visual/Sound Novels and then migrated into an anime.
Also, it helped me out greatly that someone ended up making an AMV (Anime Music Video) “Beato’s Gangsta Rap” which featured Beatrice (My favorite character in the anime) as the role of Natalie Portman and Kinzo as the man that is interviewing her.
-[ STORY & PLOT ]-
Going to the island of Rokkenjima, the Uroshimiya family gathers there every few years it seems to catch-up on things as well as discuss their family issues; especially concerning the head of the household since their father will pass away soon (Which is the reason they are supposedly gathering in the first place). The family members and their children discuss the headship and want to know who will be succeeding their father.  Their father, Kinzo, supposedly has a legend behind how he gained his wealth and the Golden Witch “Beatrice” has a picture with a strange epitaph written beneath it that talks about a way to enter the “Golden Land” and inherit all the gold; with this the stage is set.
Kinzo throws off his ring and declares that Beatrice is free to begin her little game; starting with giving a letter to Maria in the rose garden, she begins to talk about exactly what she plans to do and how they can stop the riddle in order to enter the Golden Land, speaking of sacrifices and collecting what is “Her’s” unless they can find her hidden gold (Kinzo was given 10 Tons of gold by Beatrice with the condition that he would give it all back plus the “interest” which is everything he’s acquired by using the gold, including the Uroshimiya family member’s lives).  This is now where everything begins to take a turn for the worst.

Strange murders begin happening all over the island with the witches epitaph being carried out completely (The instructions written beneath Beatrice’s painting that says what she will do, along with a riddle to solve it to restore everything back to normal and for her to give up the rights to all she is owed by Kinzo).  So many people begin dying according to the epitaph while Battler Uroshimiya attempts to keep everyone on each other’s side and try to make it seems as though an unknown person “X” has been committing the murders and neither the Uroshimiya family members, nor their servants (Kanon, Shannon, etc) committed any of the killings.  Eventually the resurrection of Beatrice happens, much to the dismay of Battler who does not believe at all in witches.  This is supposedly the end of the first “Game” (More on this later).

Thank you for reading my review for うみねこのなく頃に Umineko no Naku Koro Ni!  Arigatou and Sayonara!

One Reply to “うみねこのなく頃に Umineko no Naku Koro Ni Review”